Keeping track of personnel on board (POB) “will be a requirement on all contracts” with offshore energy companies, predicted Tonny Sørdal, vice-president for quality, safety, health and environment of support vessel operator Olympic Subsea ASA.

He was speaking just a year after one of its customers first asked for that capability and now, seven of the company’s 10 vessels have been fitted with a system that not only tracks crew and contractors while they are on board, but also as they transfer from the vessel to wind turbines and even within the turbine itself. Its other three vessels will get the system once the market improves and they return to service, Mr Sørdal said.

That first customer was BP Trinidad and the first vessel to be fitted was Olympic Orion, a 93.8m multipurpose offshore vessel built in 2012. And the tracking system Olympic Subsea installed was ConnectPOB, developed by Norwegian company ScanReach.

ScanReach spent five years developing technology that can establish a wireless mesh of nodes throughout a vessel that avoids installing cables. ConnectPOB makes use of that mesh to keep track of where people are and, after a year of in-service experience, Mr Sørdal views it as an essential part of Olympic Subsea’s safety and operational management 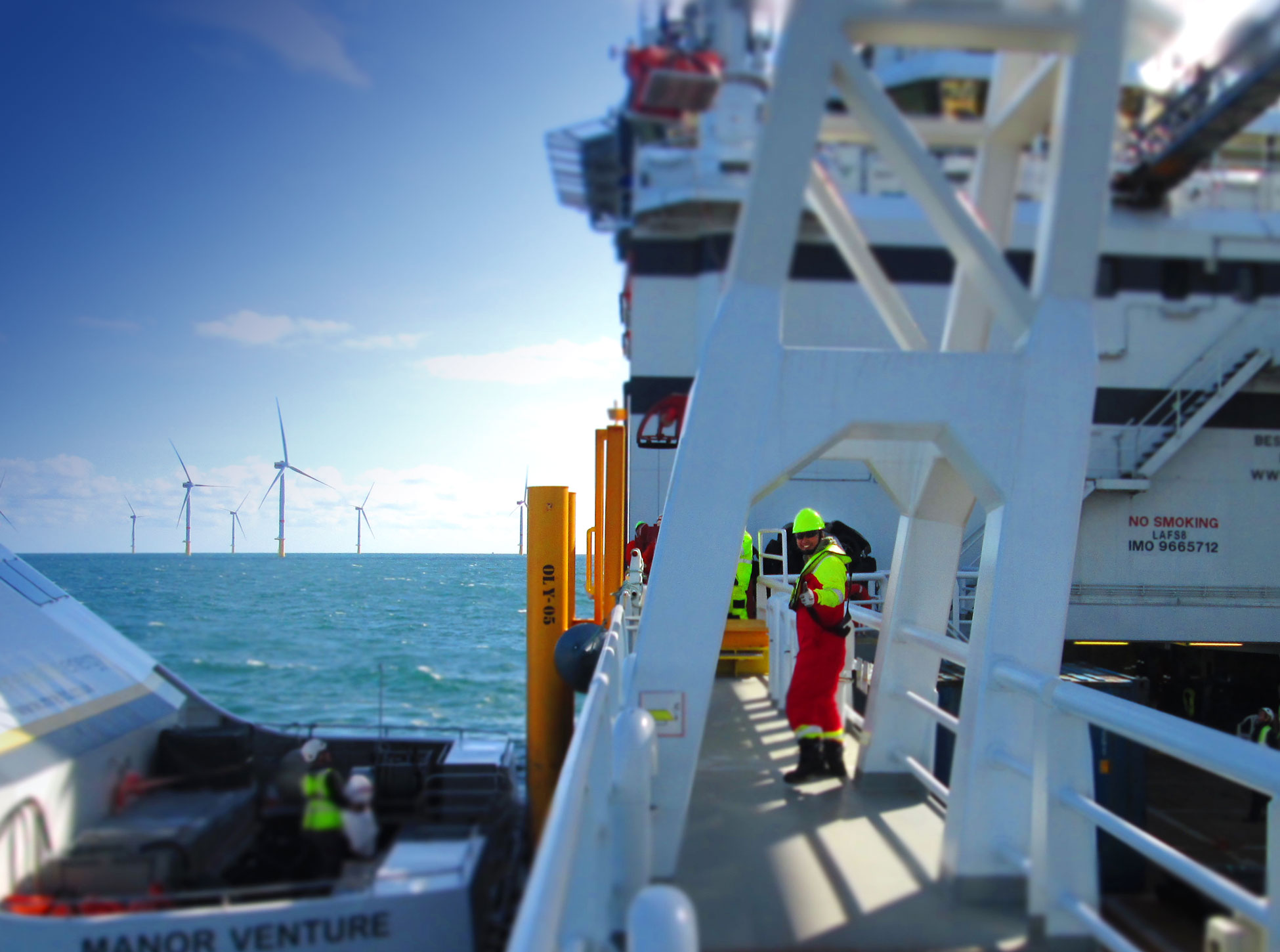 Installation was a simple ‘plug and play’ experience, he said, which was done in Trinidad, with the vessel immediately going back into service. A second vessel, the 115.4m multifunctional subsea support and construction vessel Olympic Ares was retrofitted in February 2020 prior to a job in Mexico for which monitoring 200 people was a requirement and five more vessels followed during the rest of last year.

On one of those, Mr Sørdal installed all the nodes himself in just six hours. It would be even quicker now, he said, not only because of the experience gained during installations across the fleet but also because ScanReach has refined the installation process so that each node is scanned to link it into the network, rather than having its unique code manually entered.

Olympic Subsea works in the windfarm maintenance sector, in which many of its clients’ technicians are housed on board and are transferred via a gangway to wind turbines on which they work inside the structure.

Each person has a wearable sensor which communicates with the mesh nodes on the ship and a count of those who transfer via the vessel’s gangway to a turbine is automatically created. Battery-powered nodes can also be easily fitted to the turbine – typically five at different heights inside and

two outside, ScanReach’s chief business development officer Jacob Grieg Eide said – so that workers can be tracked even while they are off the vessel itself.

Those nodes can be left on the turbine for use during future visits and the mesh can effectively extend across an entire wind farm if the turbines are no more than about 2-3km apart. Wearable sensors could then be detected at up to about 50-100m from any node across the entire farm.

As windfarms become larger, POB tracking will become a high priority for their operators and “ScanReach is probably the only solution in the world that can meet all the requirements they will need,” Mr Eide said.

So far, Olympic Subsea has not had to use the system in an emergency, but Mr Sørdal has seen it work effectively during drills. When personnel are called to their muster stations, ConnectPOB automatically records each person as they arrive and displays this information on the bridge. If someone does not muster, ConnectPOB will show which node their sensor is currently – or was last – linked to, reducing the time needed to find them.

Very little training is needed, he said. Ship’s crew and customer personnel can view material online before joining a ship and further familiarisation is provided on arrival, which includes an overview of how ScanReach’s system works and how it should be used. “It’s quite easy to learn the system and you can’t do anything wrong with it,” he said.

But both he and Mr Eide are conscious of the potential concerns crew might have about how this tracking data might be used, especially since it can also be accessed from shore offices. They both stressed that in normal use, tracking information is only used to count personnel, for example to know how many have been transferred to a wind turbine, which is a statistic Olympic Subsea needs for commercial, as well safety, purposes.

Details about who those people are is not retained and personal information is available only in the event of an emergency; it is important that personnel know that the system is not routinely used to track their individual movements, they said.

Olympic Subsea has provided valuable feedback to ScanReach that has supported further development, including a proposal that ConnectPOB should be able to interface with the operator’s crew management system, supplied by UniSea. As a result, ConnectPOB is now able to accept names and tag numbers direct from the UniSea system.

Mr Eide estimated that Olympic Subsea is as much as 2-3 years ahead of its competition because of the benefits that ScanReach has brought to its POB management efficiency and automatic reporting, as well as improved safety. More benefits to follow as the technology evolves, he said, with software updates applied over the air via satellite.

Olympic Subsea is also testing another application of ScanReach’s onboard mesh wireless system for real-time fuel monitoring, information that Mr Eide believes is not widely available to ship operators – and Mr Sørdal is looking forward to other functionality becoming available, such as fall detection, man-overboard alerts, gas, temperature and environmental monitoring.

This makes it more than just a technical tool; it also has a business benefit and customers are impressed about how the system works and what it can do, Mr Sørdal said. In the future, “we will see this kind of system in all kinds of installations,” he predicted.

What began as an innovative wireless network aimed at bringing the internet of things into the steel confines of ships’ hulls is rapidly finding market growth in specific applications, such as its ConnectPOB service that Olympic Subsea has made a central part of its commercial operating model.

It took five years for ScanReach to develop its wireless technology and secure type-approval from DNV and now it is working on its next innovation, ConnectFleet, which will provide fleet-wide surveillance that will “dramatically increase safety,” said ScanReach’s chief business development officer Jacob Grieg Eide.

It is also improving the wearable sensors, in particular to be able to detect falls onboard and man-overboard (MoB) accidents.

Some of the development work is being funded by Innovation Norway, which last year provided Nkr18.5M ($2.1M) for five pilot projects. In addition to ConnectPOB, the fall detection and MoB developments, the grant also covers real-time fuel monitoring and systems to check the environment in hazardous areas on board ships.

Mr Eide is confident of its future. Over the past year it has stepped beyond the development phase, he said, so that now, with about 30 installations so far, “we are no longer a ‘technology’, we are an approved solution.”