Reports show typical savings of around 5%, and in some cases, up to 10% fuel savings could be achieved simply by giving the bridge team real-time fuel consumption data, says Jacob Grieg Eide, Chief Business Officer of ScanReach. The Norwegian company has developed the groundbreaking wireless IoT platform that provides needed onboard wireless connectivity (OWC) onboard ships.

Its latest application for the technology, called ConnectFuel, has already successfully been fitted on ships where it links flow meters that clamp onto the fuel lines to displays on the bridge and onshore providing instant visual indication of fuel consumption as well as for a selected period.

“A vessel’s fuel cost can account for up to 70% of its total operating cost. Feedback from the industry shows a strong belief that lack of instant fuel consumption awareness could lead to overconsumption of fuel,” Mr. Eide said.

Until now, this has been technologically difficult or impossible to provide. It has been extremely expensive and complicated because of the cabling needed to transfer data around a ship. But, by using ScanReach’s onboard steel penetrating mesh of wireless nodes the cost comes down sharply, and the return on investment can be 10 times better than for conventional alternatives. ConnectFuel is also quick to fit, with installation taking as little as one or two hours. and can be installed by the crew themselves.

The next installation will be onboard the Arctic trawler Olympic Prawn,
which was delivered to Olympic Seafood by Turkey’s Cemre Shipyard in December 2020. Like other Olympic-owned vessels, the new-building already had a mesh for keeping track of personnel on board (POB) using ScanReach’s ConnectPOB system and was already fitted with flow meters which now communicate via the same mesh to a bridge display. Data is also brought ashore into the new ConnectFleet application.

Developing ConnectFuel was prompted by a growing demand for instant fuel data,
not only to monitor consumption itself but also to provide data for regulatory purposes, such as IMO’s Fuel Oil Data Collection System and the EU’s Monitoring, Reporting, and Verification requirements. It will also provide valuable guidance for meeting IMO’s 2030 target of reducing CO2 emissions by 40% by 2030, which will require an annual reduction in emissions – and thus fuel consumption – of about 6%.

Data collected by ConnectFuel is also transferred ashore by satellite and stored in the Cloud, where shore staff can view real-time consumption rates and extract and analyse the information gathered. If more specific data is needed – such as splitting main engine and auxiliary consumption, or information from individual engines – ConnectFuel can provide that if flow meters are fitted at appropriate locations in the fuel lines.

“No other system can provide fuel consumption data as quickly, easily and cheaply as ConnectFuel.”  Nick Chubb, Managing Director, Thetius

The maritime innovation consultancy, Thetius is working with ScanReach as a strategic advisor. Its managing director Nick Chubb said that the market for fuel consumption data is rapidly growing but that no other system can provide it as quickly, easily, and cheaply as ConnectFuel. Together with other potential applications of its mesh, “the impact of ScanReach’s technology could be huge,” he said.

DNV Maritime Advisory reviewed existing fuel monitoring technologies, and its report acknowledged that “smart data gathering and presentation of operational data can contribute positively and reduce emissions by creating an onboard culture and awareness around energy and fuel consumption. An IoT platform which enables collection and connection of relevant operational data is suitable as a basis for forming operational targets and philosophies.”

John Roger Nesje, CEO of ScanReach, summed up ConnectFuel’s benefits as proving ‘fuel awareness’ onboard and ashore, which might reveal, for example, that too many auxiliaries than necessary are running, or simply encourage more efficient ship-handling such as changing speed, direction and trim.

Addressing this lack of awareness “could be the single most important measure to take in order to impose a potential change of the vessel’s performance and the reduction in fuel consumption,” he said. “If you don´t know your fuel consumption it is difficult to reduce it.”

ConnectFuel is the second Connect solution released in a series of many. During this year alone, ScanReach will use the wireless platform to utilise, develop, and launch new solutions for gas and environmental sensing, vibration, weather station, and more.

Read more about ConnectFuel
Please do not hesitate to contact us 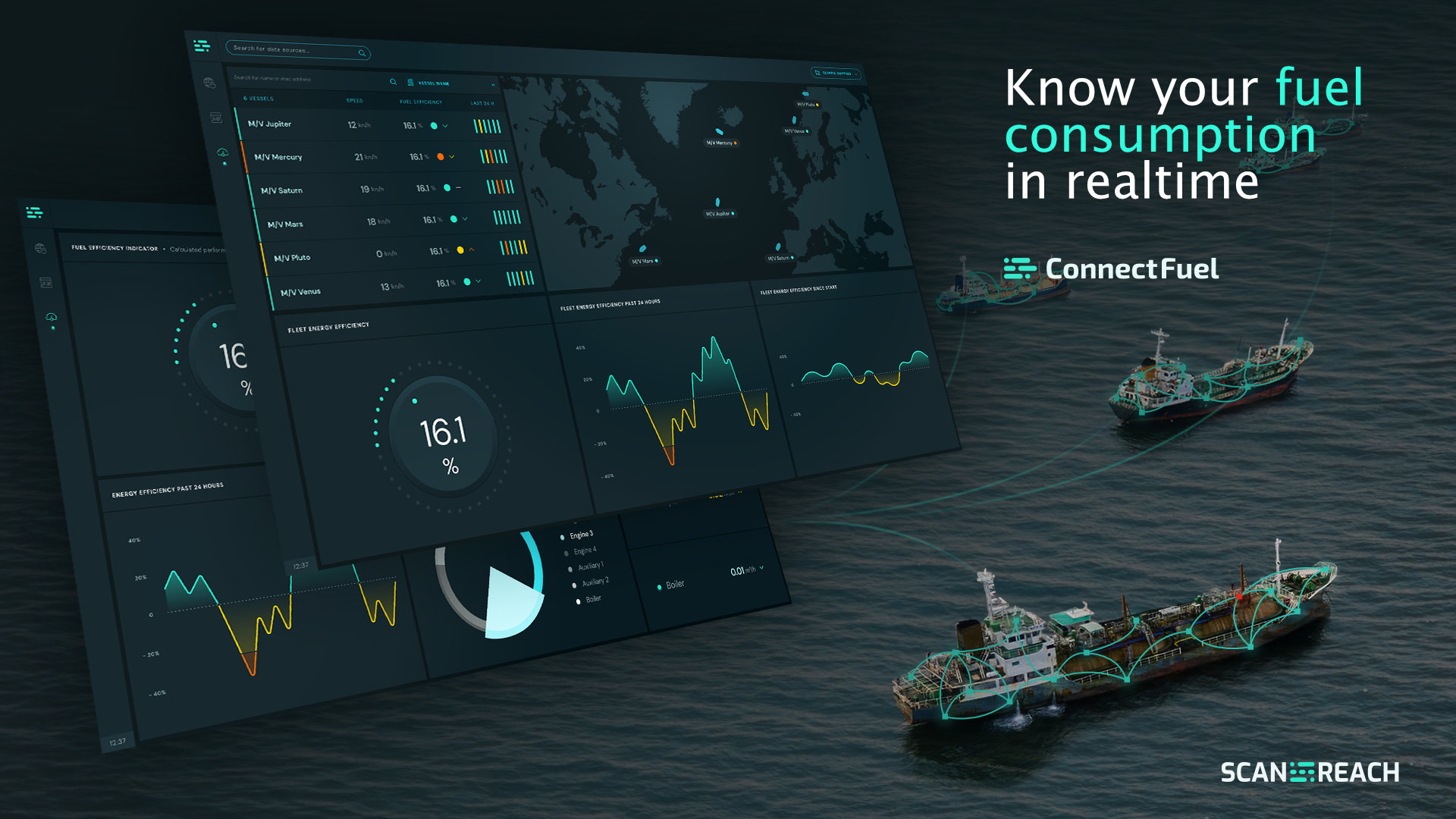